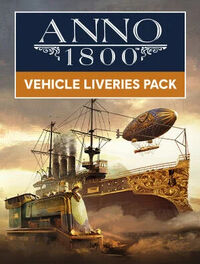 Vehicle Liveries Pack is the fourth Anno 1800 cosmetic DLC, it was released on April 6, 2021 for users of Amazon Prime Gaming. On May 25, 2021 the DLC has become available for purchase for all owners of Anno 1800. The pack adds 34 new skins and models for vehicles present in the game: ships, airships and trains. All vehicles skins (including non-DLC ones) can be found here.

Rule in style and give your trusted fleet of vehicles a visual refresh with 30 new cosmetic skins for your ships, trains and airships.