The Trading Post is the beating heart of a player's control and ownership over an island. Islands are not owned by a player and interaction with them is not possible, until a ship carrying the appropriate materials sails close to a flat piece of shoreline and establishes a new Trading Post from the blueprint that will show.

Unlike previous entries into the series, only one player can own an island at a time: The one who has build the Trading Post.

Attacking a Trading Post and destroying it, will not immediately lose the player that owns it, possession over the island. The process of how to capture islands by force, is best described in this page on War - Island Sieges. 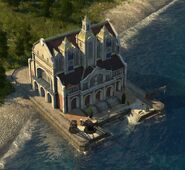 Grand Trading Post
Add a photo to this gallery 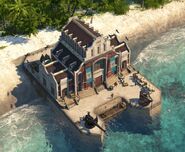 Large Trading Post
Add a photo to this gallery
Retrieved from "https://anno1800.fandom.com/wiki/User_blog:Quadrilus/Sandbox:_UpgradeCosts?oldid=14089"
Community content is available under CC-BY-SA unless otherwise noted.