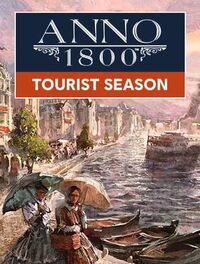 Tourist Season is the ninth Anno 1800 DLC and was released on 25th of May 2021. It is the second DLC of the Season 3 Pass. It expands the tourism system, adding hotels with

Tourists as a new residential tier. To fulfill their needs you have to build food & drink venues, like restaurants, connect hotels and various buildings with bus stops and produce new goods using multifactories. It also adds a new monument called

The main addition of Tourist Season DLC are tourists, a new population tier, living in hotels - available after attracting 500

Engineers and upgrading your public mooring. The tourists have their own needs but their happiness works in a unique way, differently than in case of other population tiers - tourists are picky and not caring about their happiness will reduce the amount of tourists living in your hotels. Attracting tourists requires bus stops to be located near the hotels, near the tourist mooring and near other places in the city, like zoos and museums. Some of the needs of the tourists have to be satisfied by new goods produced in multifactories such as orchards and chemical plants. Fulfilling tourists' needs and providing them with attractive hotspots can be very lucrative - tourists are a great source of income.

A crucial part of the DLC are food & drink venues - a new type of buildings which fulfill the needs of the tourists but they can also affect residences located in their vicinity. The venues can use different recipes, requiring different ingredients and reducing consumption of some goods (based on food and drinks) for residences nearby. Tourists provide customers who are necessary for the venues to ensure that they are profitable and operational. The more you are interested in reducing consumption of goods of your population, the more tourists and the more hotels you will require.

After lodging enough tourists you will attract the attention of The Queen and she will ask you to construct The Iron Tower, a monumental building with a luxurious restaurant at its top, which just like regular restaurants can reduce consumption of goods in a radius around the tower. Attracting many tourists to your city can be very beneficial as you can assign more tourist customers to the tower in order to increase its area of effect thus affecting more residences in your city.

The DLC also gives you access to 22 new ornaments and includes an optional story quests related to culinary adventures of one of the tourists, the construction of The Iron Tower and The Queen herself.

Turn your cities into travel destinations, with Hotels attracting a new Tourist residential tier! Open Restaurants, Cafés and Bars to impress guests and locals alike with your menus. Connect Tourists by bus to the Hotspots of your city, including a brand-new Monument inspired by one of the greatest structures of the industrial age, the Eiffel Tower!