Neutral
Sir Archibald Blake is a neutral trader in the Old World and the representative of Her Majesty, The Queen. He deals mostly in goods fulfilling Basic and Luxury Needs of higher classes, as well as one-time-use and law-themed items.

He is the only trader in the Old World to offer ships for sale, as well as the Flagship, if the right conditions are met. 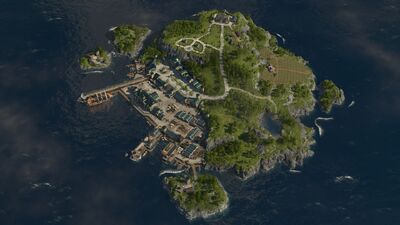 The table below lists goods offered and requested by Sir Archibald Blake, depending on the game progression. Maximum amount of offered goods is 150 tons, the goods are replenished at a certain rate per minute, depending on the game progression and difficulty setting of the restock rates. Different colours and position in the cell of the table indicate different difficulty settings: common (top value), medium (middle value) and rare (bottom value). The sign "–" indicates the good is not offered or requested at the certain stage of the game.

Sir Archibald Blake can sell and buy ships from the player. The table below lists ships offered by Sir Archibald Blake, depending on the game progression or other specific requirements. The number of ships offered at a time also depends on the game progression, and there is a certain chance of each ship being offered for sale. The sign "–" indicates the ship is not offered at the certain stage of the game.

Presently these are merely observed items; for additional information on any items, see here. Purchase prices for the following seem to be, in all cases, 1/4 the original price.