A detailed summary can be brought up by hovering the player's view over an island. A series of icons above the minimap will summarize the availability of fertilities and the number of resource deposits on the island. Clicking the icons of the resources, will cause the view to center on their locations.

A more general overview of an island's fertilities and resources is displayed when hovering the cursor over islands in the trade route menu. 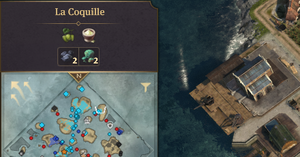 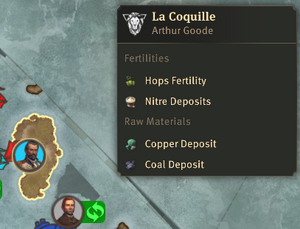 Fertilities in the context of Anno 1800, refer to islands having the ability to support the growth and/or harvesting of a specific organic material. Production buildings that are designed to exploit these fertilities, need them to function and won't produce anything without them. There's a wide variety of fertilities and buildings too:

The rule for fertilities, as opposed to resources, is that fertilities have no specific deposit or area where they need to be exploited. If an island has the correct fertility, the farms can grow the crop, the forest posts can hunt the animal, and the harbour buildings can fish for the material anywhere the player would like them upon the island in question. Most of these buildings - like farms and posts - do need a large amount of surface space to work however and the player might quickly find themselves running out of room on smaller islands. Impeding upon or limiting such a building's work space, will decrease its productivity. Harbour buildings have another problem in that they're build upon a limited amount of coastline.

If an island doesn't have a certain crop fertility the player might want, it is still possible to force an island to adapt a fertility. There are three ways of accomplishing that, two of which require a DLC:

Resources in the context of Anno 1800, refer to an island possessing certain mineral or fossil fuel deposits. Production buildings that are designed to exploit these fertilities, need them to function and and cannot be placed without them.

The rule for resources, as opposed to fertilities, is that resources are only found as a specific, predetermined amount of deposits, upon which only one building can be placed, capable of extracting it. This means that - aside from building the infrastructure necessary to support the mine, quarry or refinery - the exploitation of resources does not take up a lot of space. Since the number of deposits is limited however, the player's ability to exploit resources is relatively finite.

Land of Lions DLC) allows to move clay deposits/oil springs within the same island, as well as changing mountain mine's deposit ore: this features apply to the Old World/Cape Trelawney and New World regions. Three kinds of permits are needed for these actions to be performed: each permit can be researched under the Mastery of Nature section in Major Discoveries (Move Clay Deposit, Move Oil Spring and Change Deposit Ore). There is no limit on how many times a deposit/spring can be moved and a mine's ore can be changed, as long as you have researched enough permits.

Region-wide abundances are fertilities and resources that the game doesn't mention islands as having, since they're not remarkable. All islands within the region possess these. Players can build the associated buildings in any spot within the region that's valid for construction, and the building will function just fine as long as all its other conditions are met.

Retrieved from "https://anno1800.fandom.com/wiki/Fertilities_and_resources?oldid=16446"
Community content is available under CC-BY-SA unless otherwise noted.