View source
watch 02:46
The Quarry - The Loop
Do you like this video?
Play Sound

Diplomacy is a system of managing relations and interactions between human players, competitors and pirates. The diplomacy menu allows to sign or cancel diplomatic treaties, perform diplomatic actions, compare the military and economy ratings or see the history of relations between two characters.

Diplomacy menu can be opened by pressing the button with two crossed flags, which is located below the minimap at the bottom right corner of the screen. Or by using a keyboard shortcut, by default: R.

Reputation is a number indicating how much different factions like each other. It ranges from 0 to 100, 0 meaning hatred and 100 meaning being very close and friendly. Current reputation determines how likely a character is to agree to sign a better treaty, the higher the reputation is, the higher the chance for establishing an agreement. It can also determine if a character might want to cancel current treaty or give an ultimatum. Current reputation is displayed in the diplomacy menu right underneath a character's portrait in the central part of the menu.

Reputation can be increased or decreased in several ways:

Every two factions, which are part of the diplomacy system, always have one of the treaties active between them. There are four main treaties and two time limited treaties, which determine the behaviour of two factions towards each other.

Main treaties last indefinitely, until one of the factions cancels the current treaty, or an agreement is reached to sign a better one. The central part of the diplomacy menu is divided into four sections, one for each main treaty. The position of a character's portrait indicates which treaty is active between that character and the currently selected faction. The main treaties, from the worst to the best one, or from the right to the left in the diplomacy menu, are as follows:

Time limited treaties last for specific time period, and can be renewed once they end. Their availability depends on which main treaty is currently active. If a time limited treaty is active, its icon is displayed at the bottom right part of a character's portrait in the central part of the diplomacy menu. The time left, after which the agreement automatically ends, is indicated by a circle around a portrait - the bigger the yellow part of the circle is, the more time is left until the treaty expires. The exact time can be checked by hovering over character's portrait. The time limited treaties available in the game are:

It is possible to sign a better treaty or to cancel the current one. Signing a better agreement requires enough reputation points, higher reputation raises the chance for better treaties. Sometimes the difference between military ratings of the factions is also important, and higher strength also increases the chance of success. If you suggest to sign an agreement but the other faction is not fully convinced, they may demand some money in exchange for reaching the agreement.

To sign or cancel a treaty click on a character's portrait in the central part of the diplomacy menu, then on the button on the right. Hover over each option to see details such as success chance, click on one of the options to try to change the current diplomatic status.

There are four diplomatic actions available in the diplomacy menu. To perform one of the actions click on a character's portrait in the central part of the menu, and then on the button to the left from the portrait. A small menu opens up with the list of available actions, hover over them to see more details about them such as the chance of success or amount of coins required. Click on the action in that list to try to perform the action. The available actions are:

Canceling the existing treaty or declaring war are the two interactions which always work and have 100% success chance. Other interactions, such as flattering or signing an alliance, can have different success chances, which in the game are indicated by following phrases, from the lowest to the highest chance of success:

Every faction has their military and economy ratings which can help to determine which faction is stronger than the other. Military rating is determined by coastal defences and military ships, the more defences and ships and the more powerful they are, the higher the rating is. This rating can also determine if a faction is willing to agree to sign a treaty, having a higher military rating might increase the success chance of signing a treaty. Economy rating is equal to the profile level, determined by global population.

The diplomacy menu includes the history of events and actions which affected the reputation between two factions in the past. It lists every previous event and a reputation change it caused. To see your history with another character, select their portrait in the central part of the menu and then click on the history tab on the right side. You can scroll up and down the list, the most recent events are at the top. 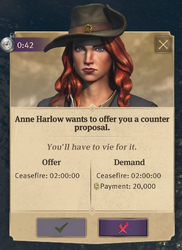 When you request to sign a treaty but the success chance is not high enough, the character might request a specific payment to agree to sign the treaty. Here the accept button is greyed out because of lack of coins. 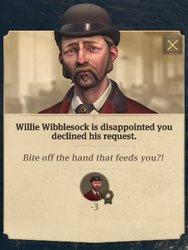 When a character comes to your main island's harbour and offers you a quest, declining them will decrease the reputation. 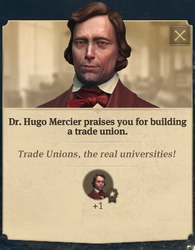 Specific gameplay actions can change your reputation with characters. For example, Dr. Hugo Mercier likes when you build trade unions. 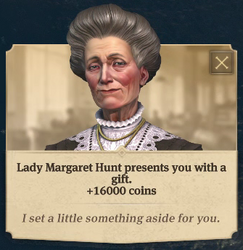 While being very friendly with another character and having high reputation with them, they sometimes might spontaneously gift you money.
Community content is available under CC-BY-SA unless otherwise noted.
Advertisement