Several bus stops connected to each other form a bus network. To connect two bus stops together their street range has to overlap. Connecting more bus stops requires their street range to overlap with the range of any bus stop that has already been within the network. Once a bus stop belongs to the network it can provide connections to hotels or venues located within its circular range.

The distance between two bus stops. Only in case of one of those bus stops the tile adjacent to it is included in the distance calculation.

In both those situations the hotel receives 100% fulilment of the variety theatre need - distance between bus stops is 30 tiles, the placement of the buildings does not matter as long as they are within circular range of the bus stops.

Each bus stop put in between two other bus stops effectively decreases the distance between them, thus letting you put those bus stops further away from each other, while providing the same level of connection to venues for the tourists. This is because the distance within the bus network is calculated as a sum of distances between consecutive bus stops. Bus stop placed with its shorter side along the road lets you save up 1 tile, while when placed with its longer side along the road it lets you save up 2 tiles. Bus stops placed on the corners of the streets effectively let you save up 5 tiles. 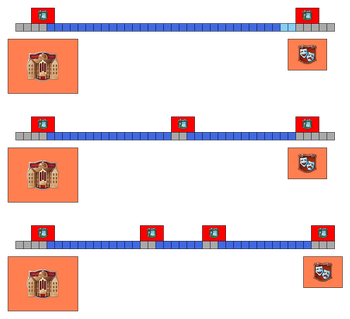 On the left the fulfilment of the hotel's need for the theatre is below 100% as the distance is equal to 35 tiles (dirt roads). However, on the right, thanks to the bus stop placed on the corner, the fulfilment is increased to 100%, because due to the corner bus stop the effective distance is reduced by 5 tiles down to 30 tiles.

Two basic needs and three hotspot needs of tourists are based on unique buildings which can be placed only once on an island. In case of those buildings, the distance of their bus stops to the hotels' bus stops does not matter. Those buildings behave as if they had an infinite range and can be placed as far away from the hotels as you want, and the fulfilment of those needs will always stay at 100% as long as they are connected to the bus network. Two of those buildings have additional requirements for the 100% fulfilment, all unique buildings with infinite range are:

to be able to provide maximum fulfilment. More attractiveness does not enable you to put those buildings further away within the network, while the fulfilment from buildings which provide less than 300

decreases linearly until reaching 0 fulfilment if they provide 0