Clipping is a exploit that involves having a building be affected by two precisely aligned circle radius-based buildings such as Trade Union, Arctic Lodge or Harbourmaster's Office. Doing this will increase the productivity or apply more bonuses than usually possible, at the expense of more incidents and challenging logistics.

Clipping can only be applied on buildings with both width and length being even numbers (or, for harbour buildings just the width), due to the way the buildings are modeled. If both sides of the target building are equal, the division can be done diagonally, in addition to the vertical or horizontal one. This way, it ends applying a double amount of items' worth of effects on it (6 instead of 3, or 8 instead of 4 - if using a Palace +1 slot policy). Moreover, the same item effects can be applied twice - which is not possible usually, as the slotted items need to be different.

This technique is only useful in very few specific cases where there are a limited amount of buildings that need to be affected, otherwise you might be better off just grouping multiple ones. It is not meant to be taken as good practice or the usual way to build things, but rather as an interesting effect that can be used sometimes.

Probably the most useful usage of clipping can be seen with the Arctic Lodges on the Gas Mines because there is a limited amount of gas deposits. In a game with the setting "plenty mineral deposits", clipping the Gas Mines and equipping the right Arctic Lodge Items (Gritty Gas Extractor and Music Box) allows gas production to be buffed enough to feed 17 Gas Power Plants (instead of the usual 8 or 9) by clipping 32 of the 52 gas pumps available for a total gas production of 10240%. Unfortunately, due to the shape of cliffs and positioning of Gas Pumps, not all Gas Mines can be buffed by clipping.

Here are two examples of a horizontal and diagonal clipping on Gas Mine (4x4 tiles):

Usually, one would try to cover as many Gas Pumps with a single mine as possible to reduce the number of technicians needed. However such a placement would be subpar for clipping since it would overlap the radii of arctic lodges. Therefore multiple Gas Mines must be used to get the proper alignment for clipping. The following images illustrate how to place Gas Mines affected by single arctic lodges (red) and clip double arctic lodges (green) to feed 17 Gas Power Plants: 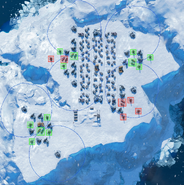 Other Arctic buildings that can be clipped are Parka Factory, Sleeping Bag Factory, Oil Lamp Factory or Lumberjack's Hut

An island can have a single Public Mooring, so using clipping allows us to improve the visitor chance. However, this works only on a few island types as can be seen below . 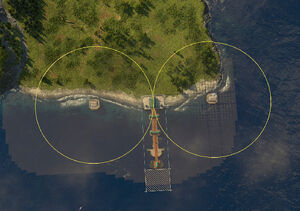 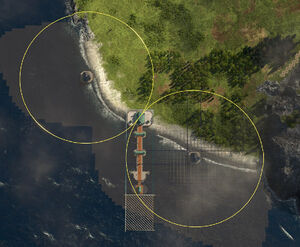 Another useful clipping scenario is for the Sailing Shipyard. Items can be combined such as to give -100% construction cost, effectively building ships for free. For example: 2 x (Mr. Swell, Hydrodynamist, Railroad Crane and Wooden Crane). However, by the time you get these items you would probably not have any shortage of the building materials. Also, with the Palace's 4th Harbourmaster Office slot you can already have -100% (or very close to it), no clipping required.

The Trade Union clipping is a bit more flexible than the others because of the freely available space. However, it depends very much on the target building and the number of such buildings required to be built.

While the primary benefit would be to save workforce, space, and getting double output from specialists giving extra goods, you will most likely end up having to put additional warehouses to be able to cope with the much higher productivity and distance to the clipped buildings. Depending on placement it might end up with a worse end result than placing them normally. Besides this, the chance of incidents such as fire and explosions will increase as the productivity reaches unusual values. Also there will be a certain amount of challenge trying to fit other buildings in the empty spaces created. The most common usage is mixing residences in the available space.

Light Bulb Factory is usually clipped because it can make use of Prof. Ram Devi, The Bundle of Energy, who offers the following extra products:

Sewing Machines. With clipping, it will offer a double amount, which is pretty good, ending up saving some of the production chains needed to be built for those products. In the following images the three ways to clip them can be seen: 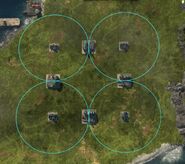 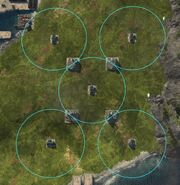 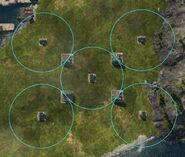 For example, to provide needs for ~530.000 investors (with all "needs reduction" newspaper articles), 14 factories running at 610% productivity (clipped) generate 85.4t of

Light Bulbs. With a productivity of 450% (not clipped), you'd need 19 light bulb factories and around 20% more tons of

Filaments to generate roughly the same amount of Light Bulbs. You can also observe the half amount of extra products received in the images below. For some perspective: 5t of

Steam Carriages is generated by a maxed out Cab Assembly Line (not clipped).

Another good candidate building for clipping is the Cab Assembly Line: by using Bruno Ironbright, Engineering Giant, only around 1/3 of the usual

Steam Motors input are required to be provided.

Lumberjack's Hut also has some benefits when clipped, by abusing the forest density increasing items, so it only requires a single free tile compared to 26 if you would use all four items (Ursula Green - Guardian of the Forests, Teutonic Technical Secateurs, Druid's Sickle, and Industrial Thresher). In the example below, we are using two 30% and two 10% forest density items.

Technically, buildings such as Members Club (6x6), Bank (10x12), Old World Hospital (6x6), Church (6x8) or Old World Police Station (4x6) can be clipped. However, the benefits are pretty small for the extra 20 influence being invested compared to just placing another building of that type. Well, unless you're super set on having say, just one bank with huge range (+70%), which could be appealing for beauty builders.