The Anno Designer is a windows based program to make building layouts, similar to the ones you can find on the Production Layouts page. Anno Designer supports the following game versions: Anno 1404, Anno 2070, Anno 2205 and Anno 1800.

If you discover anything that is missing in any Anno version, then please report to me via Message wall, or on the AnnoVerse Discord server. Agmas is also available on Discord (AnnoVerse), or via the message wall.

As the original maker of the Anno Designer, Jc.Bernack has stated that he's changed the license of the Anno Designer. This message can be viewed here (link to the Anno 2070 Fandom). This allows us to make our own modifications under the MIT license. The app is currently under active development, and we hope to bring you new features and capability soon.

The GitHub repository for the Anno Designer fork can be found here: https://github.com/AnnoDesigner/anno-designer

Keep up to date with the latest developments. This discord is also used for collaboration between contributors. Please note this is completely optional - you are not required to join this to make contributions to the repo.
This discord is also available to discuss any questions, errors, or ideas you want to share with us.
Discord Server : Anno Designer Discord
Discord Link: https://discord.gg/JJpHWRB

If you need help or support, or have any other question for us, Ping or DM Agmas or Sting_McRay on the above Discord in channel #general-chat or through the AnnoVerse Discord in channel #user-tools. You can also use the message board of this Fandom.
Thanks to a few members of the community, a shared folder for empty island layouts has been created. At the moment, only layouts of Ditchwater, Bright Sands and a few Arctic Islands are available. You can ping or DM Acidello if you have questions or want to share a layout. As an alternative, you can post in the channels mentioned above. 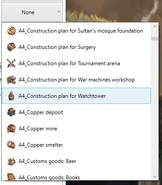