Anne Harlow is the vengeful leader of a forsaken band - the last hurrah of piracy. She was born into nobility, only to see her father Benjamin hung for speaking against the King. In exile, Anne's lust to destroy the crown and social order has only grown with the arrival of a new and vulnerable Queen.
"Poor Anne's father was executed by the mad king, and now she is mad herself."
—Hannah Goode

Anne Harlow is a hostile non-player character (NPC) and one of the two pirate leaders in Anno 1800. She can be found in the Old World.

She is Lady Margaret Hunt's niece. 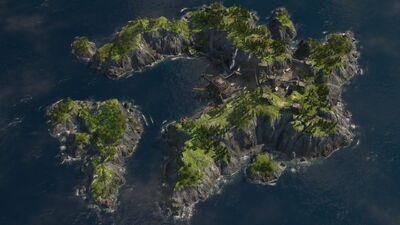 Apart from the varying results from "Flattering", "Insulting" and "Offering Gifts" depending on their likeliness, the relationship with Anne can be affected with the following:

When you want to befriend Anne, quests can be attained, offered by ships at her harbor. Every-time you complete a quest you gain reputation, but not when you fail the quest or go over time.

In the quest-line "In the Name of the Father - 'the Daughters'" (available when you have an alliance), you should be warned for the 5th quest (15+ reputation), this quest will create a large armada of ships you have to destroy, which also exist of pirate Battle Cruiser(s).

In the questline "Bashing the buccaneers" Admiral Vicente Silva asks the player to destroy Anne's stronghold.

In order to trade with Anne Harlow a trade agreement needs to be established via diplomacy.

The table below lists goods offered and requested by Anne Harlow, depending on the game progression. Maximum amount of offered goods is 150 tons, the goods are replenished at a certain rate per minute, depending on the game progression and difficulty setting of the restock rates. Different colours and position in the cell of the table indicate different difficulty settings: common (top value), medium (middle value) and rare (bottom value). The sign "–" indicates the good is not offered or requested at the certain stage of the game.

Anne Harlow can sell and buy ships from the player. The table below lists ships offered by Anne, depending on the game progression or other specific requirements. The number of ships offered at a time also depends on the game progression, and there is a certain chance of each ship being offered for sale. The sign "–" indicates the ship is not offered at the certain stage of the game.